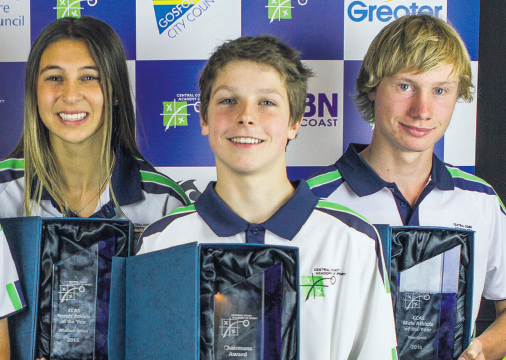 Major Central Coast Academy of Sports Awards have been won by Tom Lynch of Avoca, Madison Hilton of Kincumber and Luke Cassidy of Terrigal.

Male Athlete of the Year was Tom Lynch (Cycling). Madison Hilton (Netball) took out Female Athlete of the Year and Luke Cassidy won the Chairman’s Award. The VIATEK Central Coast Academy of Sport Awards Night was an outstanding event, punctuated by the athletes and coaches that received awards for their efforts and success over the past 12 months. Over five hundred (500) people attended the event and over two hundred (200) athletes were recognised with Certificates, Mayoral Awards and prizes throughout the evening.

A highlight was the video interviews of athletes who summarised the programs and the many highlights that were reflected upon in the video presentations. Events manager at the Central Coast Academy of Sport, Emily Burgess-Moore said: “Our athletes have all given it their best over the last twelve months and we always look forward to our Awards Night to recognise what they have achieved.”

Mark Holton, chairman of the Academy, said in his opening address: “The greatest highlight and the main reason that we are here is to thank our scholarship athletes for their efforts over the course of their respective sports programs. “All our athletes continue to represent the Academy and the Central Coast region with distinction and for this, on behalf of the Board and staff, we say a very big thank you to each and every one of you.”

Tom is one of only two Junior Men’s U/17 in NSW to achieve this honour. Madison Hilton has had a tremendous year seeing her named as the CCAS Division One Captain at both the ClubsNSW Academy Games and the Hunter Festival of Sport Games held in Maitland in July. Madison’s year was topped off by being selected into the inaugural Central Coast Heart U20’s Premier League Netball Squad and also making it to the final selection phase for the 2015 NSW 17/U team, continuing on the pathway to competing at the highest level of Netball.

The Chairman’s Award, which went to Luke Cassidy, is to recognise an athlete who upholds the principles of the organisation and elements such as fair play, sportsmanship, consideration of fellow teammates, determination and enthusiasm. Luke took his individual game to new heights, he also displayed great leadership throughout the program encouraging his teammates and taking the new athletes under his wing showing the qualities sought in the Chairman’s Award.

This year Luke has been successful in his own right playing for the U16 Gosford City Rebels, Captaining the CCAS ClubsNSW Basketball squad and capping it off with being selected in the U16 NSW Country State Team who came 4th in the Australian Junior Championships at Ulverstone in Tasmania.