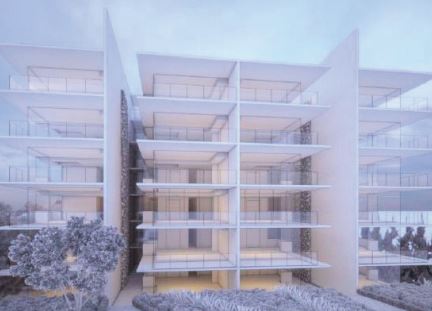 A development application for a residential flat building and the demolition of existing buildings at 144 Albany St, Point Frederick is currently with council.

The proposed development has an estimated cost of $19.86 million and will consist of 47 three-bedroom luxury apartments known as Lumiere Residences.

The site is surrounded by established three to five storey apartment buildings dating from the 1960s and 70s and a mix of large, single dwelling, townhouse developments and villas.

The proposed building will have six wings around a central core, fronting to the street and rear to minimise overlooking and privacy issues.

The proposal stays within Gosford LEP controls for setback and floor space but exceeds current height limits on the basis that the built forms positioning will enable the developer to retain 750 square metres of open space on the site.

One objection has already been submitted to Council from a member of the public in relation to the development proposal’s application to go over the currently-allowed 12 metre limit.

“A building five stories high (nearly 16 metres), will be completely out of context with the surrounding area,” the submission said. The development provides for 80 car parking spaces including four accessible spaces and a basement and lower ground floor car park and another 25 spaces are suitable for motor cycles or bicycles.

A traffic and parking impact assessment for the project concluded: “It is not considered that the proposed development will have a significant impact on the performance of the two adjacent intersections of Albany/York St and Albany/ Duke St.

“Overall it can be concluded that the development will not have an adverse impact on the efficiency of the existing local road network,” the impact report said.

Why does our high rise need to be higher than Berlin’s?