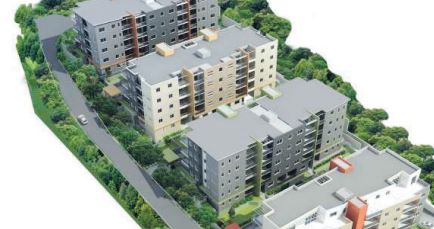 Approval has been given for the development of four residential fl at buildings in Ormond St North Gosford.

The project has been valued at $19.6 million. Gosford Council voted unanimously to approve the development at its ordinary meeting on October 27.

The decision had been deferred on September 22 to enable councillors to undertake a site inspection. Speaking in favour of the motion to approve the development, Cr Vicky Scott said it was an example of a development that would provide affordable housing in the right location.

Cr Gabby Bowles said: “At the site inspection it became even more evident how positive this development is going to be for that area.

“This is a substantial residential development and I think it is going to be positive for the city…a positive step forward for our city in providing for the needs of our residents.”

Seven public submissions were received during the notification period but Council staff recommended that issues raised did not warrant refusal of the application or could be addressed by conditions of consent.

“The proposal will not detract from the character or scenic qualities of the area or have unreasonable impacts on the environment,” Council staff stated in their report.

Issues raised by councillors and the public prior to the decision included traffic during construction, dilapidation of Council’s road infrastructure, traffic after the development and privacy to the rear yard of adjoining properties.

The developer will be required to make a Section 94 contribution of $589,407 to Council. The development will consist of 110 residential flats and will use the bonus height and bonus floor space ratio provisions permitted under the Local Environment Plan.

The dwellings will consist of 16 one bedroom units, 84 two-bedroom units and 10 three bedroom units. Vehicle access will be via Range Rd and Ormond St and there will be three rows of communal open space between the blocks.

Vehicle parking will be below each block over several levels, with a total of 153 off-street spaces including 132 for residents and 21 for visitors.

Coles and Woolworths both to open at Lisarow

Where should CBD expansion end?