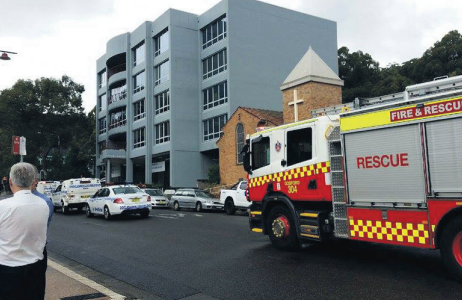 Kensmen building during the evacuation

A man has been charged after threats were allegedly made to another man and a law firm.

About 2.45pm on October 13, 2015, a threatening email was received by an employee of a law firm on Donnison St, Gosford.

The evacuation alarm was activated and police and Fire and Rescue NSW attended to completely empty the building. Following a thorough search of the area, officers deemed it safe and all employees were allowed to return to their workplaces.

Police from Brisbane Water Local Area Command commenced an investigation and later arrested a man at a home unit on Terrigal Dve, Terrigal.

A laptop, tablet and smartphone were seized at the location and taken for further examination.

Investigators will also allege two threatening emails were sent to a 20-year-old man earlier in the day. The 34-year-old man was taken to Gosford Police Station, where he was charged with three counts of use carriage service to threaten/menace harass.

The man was granted bail to appear in Gosford Local Court on October 27, 2015.