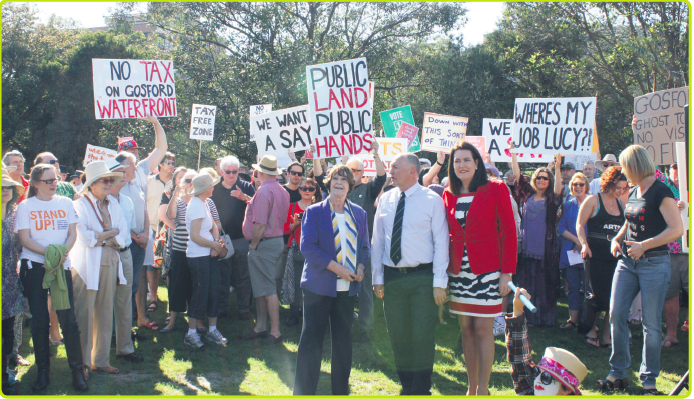 Local Labor politicians have joined forces to condemn the decision to build the Australian Taxation Office on the former site of the Gosford Public School.

Senator for NSW, Ms Deborah O’Neill, member for Gosford, Ms Kathy Smith MP and shadow minister for the Central Coast, Mr David Harris supported a community protest on the Gosford waterfront that was scheduled for Saturday, October 3. They said there had been an intense and immediate response from the community following the Liberal Government’s announcement of the Gosford ATO site.

With hundreds of people taking to Facebook and Twitter to air their outrage, public anger and frustration has been overwhelming, the local opposition politicians declared. “The people have spoken, and they don’t want this building on this prime land,” Sen O’Neill said. “I believe in bringing more jobs to Gosford, locals believe in bringing more jobs to Gosford, but not at the price of valuable community open space.” she said.

“With construction of the four-storey building on the old Gosford Public School site not due to begin for another twelve months, cries for community consultation and a re-evaluation have come thick and fast. “The community knows it is our land, and the community should have a say on what goes there. “The secrecy of a closed tender process, with a deal done between Mike Baird and Tony Abbott, should not end up with public land sold off for an undisclosed amount and the construction to be done by the lowest bidder.

“Labor will not stand for Gosford to be stuck with a building that will be standing longer than this arrogant government.” Senator O’Neill said. Mr Harris said he shared the community’s concerns about the use of prime waterfront land. “This is just another example of why the Central Coast just can’t trust the local Liberals. “With no community consultation because the Liberals think they know better, Gosford’s redevelopment will now have to work around a four-storey, brown brick monstrosity right on the waterfront.” Mr Harris said.

“The old school site was supposed to be set aside for public use given its prime waterfront location and history,” Mr Harris said. “It was a perfect location for an iconic public development. “There are many sites in Gosford that are suitable for an offi ce block but instead the Liberal Party has chosen one of the prime public sites,” he said.

State Member for Gosford, Kathy Smith said she had been inundated with calls of protest about this proposal by the Liberal Government. “This is just another example of total lack of understanding of public opinion by the current government and their local members. “Without any meaningful community consultation or input, this “big brother” decision will force future development of this prime land for public use to fit around a Federal Government building.

“Waterfront is in short supply for residents in the Gosford vicinity and it should be developed for recreational and leisure use by residents and visitors alike.” Ms Smith said. Community members will come together to protest this decision at 8:30am, Saturday 3 October at the Central Coast Leagues Club Oval on Georgiana Terrace, Gosford.

Senator calls on Prime Minister to intervene over ATO site