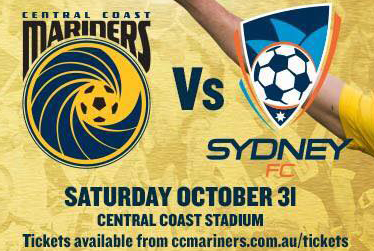 Tony Walmsley addressed the respect he holds for the returning Graham Arnold and his excitement towards seeing the two styles of football clash in front of a bumper crowd at Central Coast Stadium. Walmsley also responded to comments about his wingers not defending and noted that the Mariners are “nothing like anything they’ve (Sydney FC) faced this season.” Walmsley also spoke about team selection.

Roy O’Donovan spoke about the “poison” nature of derbies he has played in such as Sunderland vs. Newcastle United (England) and Hibernian v Hearts (Scotland). This is the first NSW Derby the Irishman will be exposed to and he is hoping for a “poisonous, horrible edge” that derbies are known for.

In some late injury news – Harry Ascroft has been ruled out of this weekend’s clash with a wrist injury that was incurred during the Mariners’ Hyundai A-League round 3 fixture against Melbourne City last weekend.