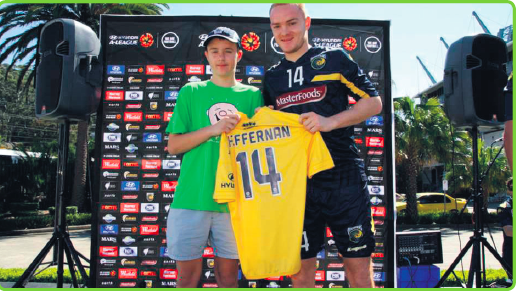 The family event coincided with an intra-club match to launch Hyundai A-League Season 11. The intra-club game was the Mariners fi nal hit out before the Hyundai A-League Season proper kicks off on October 10. After the match, players did their traditional lap of honour, providing fans with the perfect opportunity to take a selfie with their favourite player. Family Day was the first roll out of new merchandise for the 2015 season and players had sharpies on hand to sign their fans’ t-shirts and caps.

The new-look playing squad was officially presented with their Hyundai A-League playing kits by Head Coach, Tony Walmsley and introduced to the Central Coast Mariners members and fans for the first time. The Newcastle Permanent inflatable pitch was a huge hit with the little ones.

The Western Warm Up Field housed plenty of activities to keep members and fans entertained including jumping castles, animals from The Australian Reptile Park, hover archery and much more. Throughout the day, the crowd was entertained by live music performances from local up and coming Coasties such as Joel Leggett, Georgina Grimshaw, Alex Toole and ‘Just Between us’.

Crisis meeting to keep Mariners on the Coast

Mariners fans hope for a memorable finish to a forgettable season