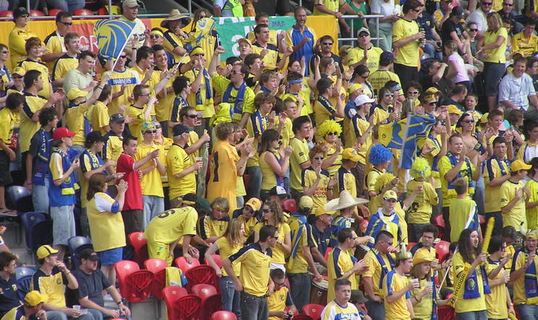 Thanks to Roy O’Donovan’s opener and two penalties from Fabio Ferreira within 10 minutes, the Central Coast Mariners achieved an entertaining 3-2 victory over Perth Glory at Central Coast Stadium in the opening match of the 2015 Hyundai a-League on Saturday, October 10.

An offside attempt at a goal by Perth Glory within a minute of the start of play sent the 8,073 local fans quiet for a while, but in the ninth minute, the Mariner’s new recruit, number nine Roy O’Donovan, opened the scoring with a quick-fi re strike. After some classy play down the right fl ank, Storm Roux managed to send the ball into the 18-yard-box where O’Donovan knocked it over the line. Number four, Jacob Poscoliero made up for his first-minute sloppy defence with some solid defensive work as Perth pressed their attack down the right wing. Liam Reddy’s consistency and steady hands throughout the match also made a big contribution to keeping Perth at bay.

Central Coast were working the diamond well and using both the left and right fl anks to stay in attacking mode and make direct runs on the box during most of the fi rst half. However, there was nothing Liam Reddy could do when former Hull City player and Socceroo, Richard Garcia scored an equalizer for Perth in the 23rd minute. A cross from Josh Risdon connected beautifully with captain Garcia’s head for a precise goal. Other first-half highlights included an attempt on goal from Fitzgerald that went wide of the Glory goal.

The Mariner’s Fabio Ferreira’s pressure down the right wing almost resulted in a goal when his cross connected with O’Donovan but skimmed over the crossbar at the 30 minute mark. Nick Fitzgerald missed another shot at around the 36 minute mark that whistled past the left post. A Storm Roux bicycle kick gave the Mariners yet another chance within a minute, but again, it went over the cross bar.

Finally, just before half time, Mitch Austin took a shot but failed to score for the Mariners so the game remained locked at one all at the half time break. The second half was as entertaining as the fi rst. The Yellow Army’s brass band was in full swing and infl atable palm trees did the pogo in time with the supporters in bays 16 and 17. Two penalties in 10 minutes put the Mariner’s in control of the match by the 68th minute. Fabio Ferreira took the fi rst spot kick when Guyon Fernandez was given a yellow card for a late tackle in the penalty box. Ferreira’s precision kick into the top left hand corner of the net put the score at 2-1.

A late tackle on Storm Roux inside the penalty box saw Ferreira step up to the spot again to score the twin of his fi rst cracker penalty shot. In the dying minutes of ordinary time, Liam Reddy was forced to make three quick saves as Perth fought back, the first of which would have been a certain goal for Perth without Reddy’s handiwork. Perth was able to score in extra time to see the Mariner’s take the three points by only the one goal. The combination of Mitch Austin and Ferreira looks promising for the Mariners in 2015-16, as twice within the space of minutes, crosses from Austin to Ferreira resulted in (unsuccessful but promising) shots on goal.

Covic was forced to make a save at the 80-minute mark when O’Donovan cut through the Perth defenders after a setup from Ferreira. “It’s a really bold and brave thing for them to go out on match day one and deliver that performance,” said Mariner’s coach, Tony Walmsley after the home side’s victory. “We put a young team out and when you’ve got three debutants starting, there’s always a sense of uncertainty about how they’re going to go because you’ve not seen them in that environment, but in terms of the level of belief I’ve got, it was never in doubt.

Round two saw Central Coast Mariners travel to Brisbane to play the Roar where they played well but lost 2-1.