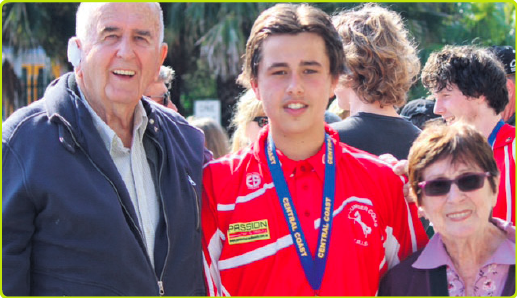 Blake Hong played for the Kincumber’s Under 16s side and won his match at Gosford Stadium on Sunday, September 13. Younger brother Max Hong played for Kincumber’s Under 12s side and was also victorious. Their father, Kevin Hong coaches both teams and has done so for some time. If winning two grand fi nals was not enough excitement, the day was made extraspecial because the boys’ great grandparents, Ms Dorothy Calbert and Mr Brian Calbert made the trip to Gosford from Port Macquarie to watch the boys play. Max Hong, who is 12 years old, has played in, and won, the last three grand fi nals with Kincumber. In the last three years the team has lost only two games, drawn two games and achieved 1,442 points for and only 136 points. It’s an achievement the entire family are all proud of. Blake Hong was playing his third grand fi nal and had his fi rst win. It is Blake’s 10th year with the Kincumber Colts. “Not many Great Grandparents get to see both their great grandsons and grandson at a stadium winning two grand finals,” Ms Belinda Hong said.