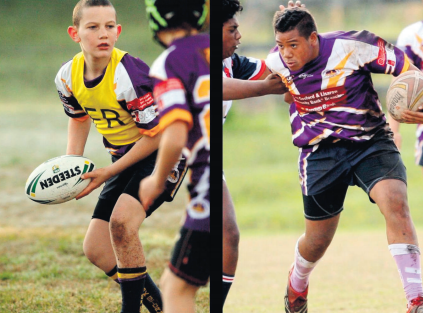 The Gosford Kariong Rugby League Club held its annual presentation ceremony at the Central Coast Leagues Club on Sunday, October 18 to acknowledge the notable achievements of the season just passed.

A bevy of trinkets were handed out to a host of worthy recipients in a breezy afternoon of purple pride.

The club’s grand finalists for 2015, the U13(2)s were the occasion’s big winner securing three major awards: best coach to Shaun Martin; best manager to Samantha Taylor, and the Gosford Kariong Senior Player of the Year prize, which went to the talented representative lock forward, Nick Rodrigues.

The Junior Player of the Year was awarded to the tireless, Rylee Oakes who played for no fewer than four of the club’s seven competition teams throughout the season.

Rylee was a key member of the U10(2)s side and also backed up for the U10(1) s, U11(2)s and U12(3)s whenever required. The Presidents Player of the Year, fittingly awarded by the Storm’s president, Jason Bird, went to U15(1) s prop Toutai Aho who’s contribution both on and off the field was duly acknowledged.

The second recipient of the prized, Clint Gosper Memorial Award for Club Person of the Year, went to popular U11(2)s coach Greg Eather who had also taken charge of the talented U9(1) s squad late in the season.

The Mini League Team of the Year was won by Ed Johnson’s Under 8s who had the thrill of playing at the Central Coast Stadium during half time of an NRL game back in July.

Under 15s Players Player Award winner, Logan Campbell was presented with a swish looking jacket in recognition of the back rower having played 10 seasons with the Storm.

And on a more sugary note; the lucky door prize for correctly guessing the number of jelly beans in the jar, went to U9(1)s player; Andrew Grimley.

Hearty congratulations were reserved for the afternoon’s major award winners while a big clap went out to all of the club’s players, officials and parents who had united in producing yet another successful season of junior rugby league in the Gosford Kariong region.