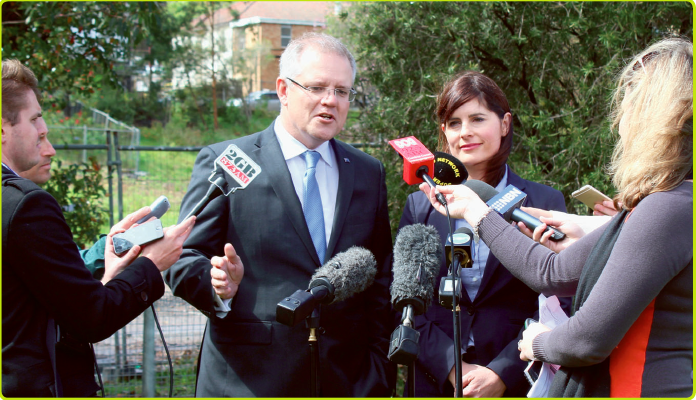 The announcement, which took place on the site in Mann St, was also attended by Gosford mayor, Cr Lawrie McKinna, Gosford Council CEO, Mr Paul Anderson, former NSW member for Gosford, Mr Chris Holstein and Gosford Chamber of Commerce president, Ms Ali Vidler. Ms Wicks said she considered the ATO development in Gosford to be the Coalition Government’s most important initiative on the Central Coast. “Coasties tell me every single day they want the opportunity to not only live in the best city and region in the world but also to be able to work here locally as well,” Ms Wicks said.

She said 600 people coming into the heart of Gosford every single day means “more coffee shops thriving, means 600 more coffees every day or, if you drink coffee like I do, perhaps around 1,200 coffees that will have to be made every single day. “It means lunches, it means dinners, it means the newsagents will benefit, it means our drycleaners will benefit. “What we see here in this site behind us is, we’re going to see those jobs start here on the Central Coast,” Mr Morrison said. “It’s not just the Commonwealth hub which is going to be established here, it’s the works that will now take place and the planning and the design and the construction over the next couple of years which will see this as a hub of economic activity which will support so many other industries and so many other things right here on the Central Coast,” he said.

When asked whether the 600 jobs announced would be new or relocated positions, Mr Morrison said the site would house a fourstorey building that would have 600 people working in it. “People who come and have to deal with Commonwealth public servants in an array of different agencies, they will be coming here, they will be doing business here, they will be in this community, they will be in this CBD. “All of that means jobs…people can quibble about the economic metric analysis, but I tell you what, the businesses around here will see one thing, they will see more jobs and that’s what the Central Coast needs.

“This is a trigger, this is an initiator and I think it can really fi re up the aspiration which I think there’s never been any shortage of on the Central Coast but this, I think, will really fuel it.” Ms Wicks said construction on the waterfront Gosford site would start by the end of June 2016. “The building will be open by the end of 2017, so we should expect to see the jobs fl owing in from the end of 2017,” she said. Treasurer Morrison said the Australian Taxation Offi ce would be a signifi cant occupant of the building but arrangements were still being made with other agencies, which will be the subject of other announcements when finalised.

Mr Morrison and Ms Wicks did not provide details about the cost of the development.