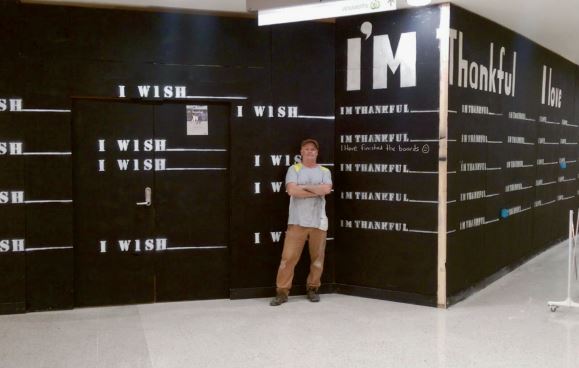 T Aspires he Gosford Aspires project has been a resounding hit with the community over the past four months, according to local artist Mr Glenn Hambleton.

Earlier this year, Mr Hambleton was approached by management of the Imperial Shopping Centre to create “I’m thankful” and “I love” message boards in the newly renovated Mann St, Gosford centre.

“They were an instant hit with the community and thousands of important, positive reminder messages have been written on the boards,” Mr Hambleton said.

Centre management recently asked him to repaint the boards as they were becoming well-worn and to add some new boards with an additional message, “I wish”.

“The boards were redone and extended and, once again, they proved to be an instant hit and were completely full of messages within one day of being completed,” he said.

“I spent two days redoing the boards and received many positive comments from the general public which justified the idea and concept for me.

“I also got some feedback suggesting the boards were going to attract negative comments and be used for graffiti.

“Whilst I can’t control what people write, the overwhelming majority of messages are written by children expressing their thanks for love, for family, pets, nature, etc,” he said.

A Gosford Aspires Facebook page has also been set up to encourage the community to visit the Imperial Centre, write their messages on one of the aspirational boards, take a photo of themselves with the message and then post it on facebook.