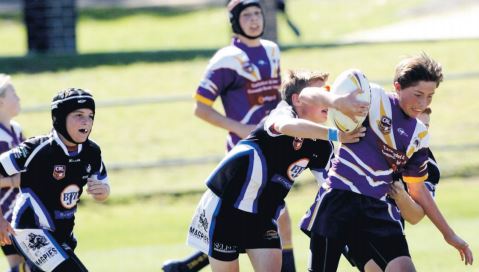 Bradley Shaw runs headlong into Finn Moulston during the 2nd half

The Gosford Kariong Storm’s U13(2)s went down to an impressive Ourimbah side 46-22 in a free flowing grand final at the Morry Breen Oval, Kanwal on September 12.

The game shaped as a huge challenge for the Storm boys given the unflinching dominance Ourimbah had asserted throughout 2015.

Given that the Magpies had traversed the year undefeated and conceded an average of little more than two points per game throughout the season proper, Gosford did remarkably well to run in four tries against the northerner’s brick wall defense.

The Storm did struggle to blunt Ourimbah’s potent attacking weaponry however as elusive Magpies proved especially hard to handle. To their credit, the Shaun Martin coached Storm team never shirked the difficult task at hand.

Despite finding themselves 16-0 behind after just ten minutes, and then 28-6 down in the shadows of half time; the Gosford lads fought back manfully to trail by just a dozen with a quarter of an hour to play.

Weight of possession and the overall class of the Magpies shone through during the game’s later stages as they added four further tries to Gosford’s one, to put the game well beyond doubt.

A tremendous game from the Storm’s Sione Vaenuku yielded the tear away backrower a brace of tries which could so easily have been three, or even four; after the popular forward had been held up over the Ourimbah line during the opening half and then grassed just millimeters short of the stripe with five minutes remaining.

Nick Rodrigues was the other standout for the runners up; the classy lock forward worked tirelessly in both defense and attack; the latter discipline highlighted by a marvelous short ball, delivered in the lead up to Vaenuku’s second try.

Ourimbah finished as worthy premiers having swept aside all opposition throughout the winter, while the runners up from Gosford Kariong did themselves proud in a spirited grand final showing.