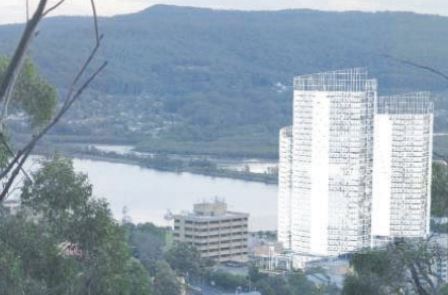 In a presentation to the JRPP, CEN manager, Ms Jane Smith repeated the group’s objections to the triple tower development known as Waterside that had been presented to Gosford Council in February.

Ms Smith said the grounds for CEN’s objection to the development were: “excessive height, excessive floor space ratio, lack of infrastructure to support such an intense development, overshadowing and wind tunnel effects”.

CEN’s list of objections also included: “proposed towers will dominate the landscape; sets a precedent for other developments; lack of adequate community consultation in a DA process rather than through other planning procedures such as a planning proposal; and, not in the public interest”.

Ms Smith focused on the issues of excessive height and floor space ratio when she addressed the JRPP.

She told the panel she believed Gosford Council’s analysis of the development’s height lacked “planning rigour” and did not address statutory requirements of particular clauses of the Gosford Local Environment Plan.

Ms Smith was also critical of Council’s recent resolution to initiate the process required for a development proposal to amend the GLEP 2014.

“To assume that this can now justify that a significant height variation be approved… seems to assume that the planning proposal will proceed and any submissions during the exhibition period will be ignored,” she said.

CEN used overshadowing to demonstrate its point to the panel by comparing the overshadowing impact of existing conditions with a complying envelope and the proposed development.

According to CEN, the overshadowing at 9am would have an impact across the public open space at Leagues Club field and the waterfront reserve “multiple times greater than existing conditions”.

“It’s CEN’s understanding that this is the fundamental reason why building heights under the current GLEP 2014 were limited along Baker St and Georgina Terrace to ensure the Leagues Club field received maximum sunlight to enable this area to reach its full potential,” Ms Smith said.

“That is, a public place where people come to bring life back into the city,” she said. She also said that the towers would not complement the natural topography of the area and said that Tower 1 would be nearly four metres higher than Presidents Hill.

“This would mean views from Presidents Hill looking southeast across Tower 1 would be blocked by the proposed tower,” she said. In its submission to the JRPP, CEN used a photograph of the Gosford CBD from Rumbalara Reserve to show how the development would result in “significant view loss”.

“Floor space ratios are not developed for individual developments but for specific areas of precincts,” she said. “Consequently the FSR developed for this site is a reflection of the desired character that was intended.

“To accept a FSR variation of 72 per cent over what was intended plays no regard to how development of this site fits into the urban context of future development throughout the Gosford Business District,” she said.

“To approve the DA is not in the public interest as it undermines the integrity of our planning system,” Ms Smith said in conclusion.