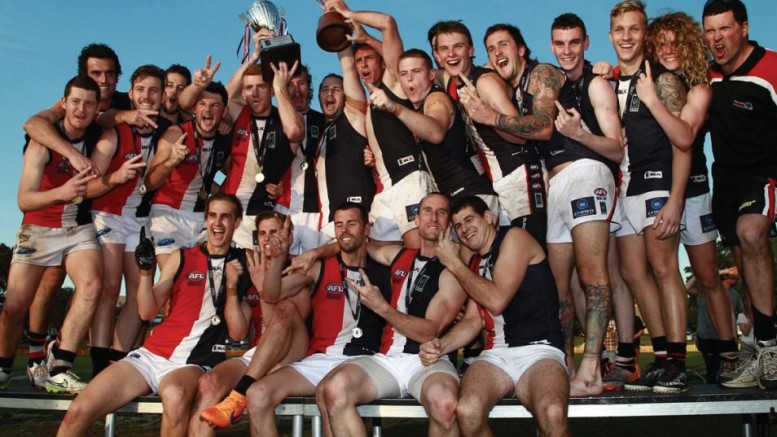 Terrigal Avoca have defended their 2014 Premiership with a thrilling 14.9.93 to 10.11.71 win over Newcastle City in the 2015 Wilson Security Black Diamond Cup Grand Final at No 1 Sportsground.

Terrigal Avoca midfielder James Webster capped off a fantastic season by winning the McBain Medal as the best player on the ground.

Newcastle City had the better of the opening exchanges but were unable to capitalise and it was the Panthers, through Corey Billins, who got the first goal of the game, which was quickly followed by another to James Polglase.

The Blues were able to get their kicking boots on in front of goal courtesy of Mitch Crawford which was immediately followed by a Jacob Dawes goal after a smart handball from Jackson Monk, and at the fi rst change, it was Newcastle City who led by three points.

Aaron Seen gave Newcastle City the perfect start to the second quarter, however three goals in three minutes to Corey Billins and another from James Webster gave Terrigal Avoca the advantage, and with both teams trading goals leading into half time it was Terrigal Avoca who went to the long break leading by eight points.

The third quarter was a tight affair, however it was Terrigal Avoca who again made the most of their opportunities, and by kicking three goals to one for the quarter, were able to lead by 19 points at the final change.

Terrigal Avoca suffered a blow in the third quarter with representative midfielder Sam O’Brien having to leave the field with a broken arm.

Supporters from both teams were urging their teams for one last effort and it was Terrigal Avoca who kicked the first goal of the final term courtesy of a contested mark, play on and goal, from Sam Ellis, which made the margin 26 points.

Newcastle City forward Courtney Knight, first goaled from a mark and then snapped a miracle goal from the pocket, which was followed by a goal from a 50 metre penalty to Andrew Willmot and suddenly the margin was just nine points with ten minutes to play.

Both teams strived hard for the next goal and once again it was Terrigal Avoca who made the most of a contentious advantage call for Brendan Harper to mark and goal from the goal square, and when Angus Darling goaled on the run, it was all over.

The final margin was 22 points. For Terrigal Avoca, Sam Telfer, Will McKellar, Warwick Bloom and Alex Young were their best.