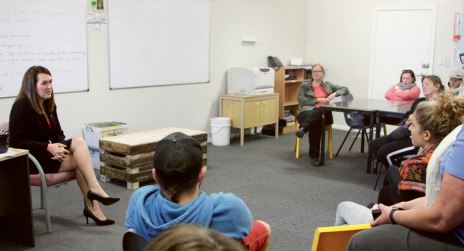 A major report into the current state of vocational education is bad news for Central Coast students, according to Senator for New South Wales, Deborah O’Neill.

The Mitchell Institute Report shows that spending on the vocational education system had plunged 8 per cent in the last year, and that completion rates had fallen 6 per cent. “As funding is cut, the quality of vocational education is suffering, and it is no wonder that student completion rates are plummeting and unemployment is at decade-high levels,” Sen O’Neill said.

Speaking from Ngaruki Gulgul Central at Mt Penang, Sen O’Neill said that already vulnerable and disengaged young people would be hit hardest by these cuts. NG Central is an accredited special assistance school which offers Years nine, 10 and 11 along with a Vocational Certificate 1 qualification. It gives previously disengaged students a new opportunity to build personal, social, and professional skills in a differently structured environment.

“Youth Connections and the new NG Central have already felt the brunt of cuts to vocational education with the federal Government closing the program and ceasing federal government funding at the end of last year.

“This was a program that was lifting disengaged young people out of a life of disadvantage and giving them recognised skills for getting a job. “The average cost per participant in Youth Connections was just $2,750; less than a quarter of the cost to government of the average high school student, yet cutting these programs won’t be a saving at all.

“Leaving these young people without skills or training will cost the community in dollars and safety, and we all pay a very heavy price when young people slip through the cracks and end up in juvenile justice or worse.” But Sen O’Neill said that is exactly what the rehashed Work for the Dole program was doing to people.

“Work for the Dole didn’t work the first time, and it won’t work now. “Only around 35 per cent of participants go on to find full-time employment after the program. “Work for the dole will not make young Coasties work ready or give them the skills they need to get a job after their term of indentured labour finishes.

“Pulling weeds for 25 hours a week will not get a young person job ready. “Labor believes in helping young people get a job through the right training, work experience and incentives and the appropriate level of support,” Senator O’Neill said.