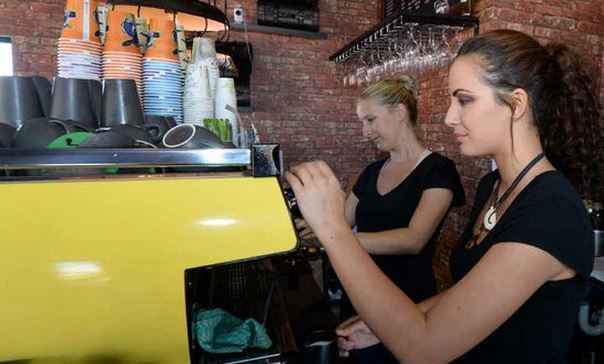 Sen Fifield opened the café, which is the latest business initiative of Fairhaven Services at their 209 Brisbane Water Dve site in Point Clare.

His visit to the Central Coast was also to make a national announcement on funding for Australian disability enterprise (ADE) jobs.

The Senator announced Australian Government funding to deliver employment certainty for around 200 people with disability on the Central Coast.

“Without ADEs, many people with disability would lose the opportunity to work, socialise and learn new skills,” he said. “This funding is about ensuring that supported employees and ADEs have certainty now and over the next three years.

“The new contracts will reduce red tape, and help specialist businesses that employ people with disability to make the transition from current arrangements to the new claiming processes on the National Disability Insurance Scheme.”

“It’s fantastic to have this important announcement happen right here on the Coast, where we have so many great local disability organisations,” Ms Wicks said. “These include Fairhaven Services, based at West Gosford and Point Clare, Terama Industries at Gosford and Lasercraft Australia at West Gosford.

“Fairhaven employs more than 140 locals, and has today cut the ribbon at a new coffee shop in Point Clare. “I’m pleased to confirm that under this funding, Fairhaven will receive $4.1 million over the next three years which is a credit to the work they’re doing.

“Without them, many people with disability would lose the opportunity to work, socialise and learn new skills.

“This funding is about ensuring that supported employees and ADEs have certainty now and over the next three years.” Mr Buultjens said it would deliver more varied work options.

“This will mean we can continue to support our employment services, like at our West Gosford factory where workers pack cosmetic items, and our new coffee shop enterprise at Point Clare where we’ll have four new job opportunities,” Mr Buultjens said.