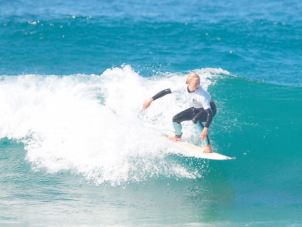 Surf lifesavers from across the state took advantage of the late winter sunshine to contest the NSW Board Riding Championships at Copacabana from Thursday, August 20 to Saturday, August 22.

The three-day event featured entrants from Under 13 through to Masters in both short and long board riding, with athletes from over 30 clubs represented.

Due to the conditions, the competition was relocated from Avoca to Copacabana to give the entrants the best chance of success.

Competition was strong across all age groups with a number of fine performances in the small surf. Macy Callaghan (Avoca Beach) proved why she is rated as one of the most talented youngsters in Australia with gold in both the U14 Board Riding and the U15 Short Board events.

“Copa is one of my favourite places to surf, the weather has been amazing and it sure has been a lot of fun. “It hasn’t been the biggest or best conditions, but it’s still fun and I have been able to get some good waves,” Callaghan said.

“I probably did have a bit of an advantage over the other girls because I know the waves being from the area, but the beauty of surfing is anyone can win on the day.” It was a highly successful championship for the men from the Central Coast.

The format for the competition was slightly different this season as it was held away from the main State Championships for the fi rst time to allow more athletes the opportunity to compete. Championship referee Terry Aldridge said overall, it was a highly successful carnival.

“We’re very grateful to Gosford Council, Copacabana residents, local surfers, offi cials and athletes for being so accommodating after we had to relocate the event at short notice,” Mr Aldridge said.

“I think we’ve been really fortunate with the conditions throughout the three days of competition as for the bulk of it we have had two good banks.

“Waves for the Masters events were around three foot, which suited both the short and long boards. “The surf increased to around 4-5 feet on Friday and it was pretty consistent for the open events on Saturday as well.

“All competitors were delighted that we have been able to move it to a standalone event as it gives them the opportunity to focus on their board riding, so the responses have been positive,” he said.

Board and Ski Series Round One held