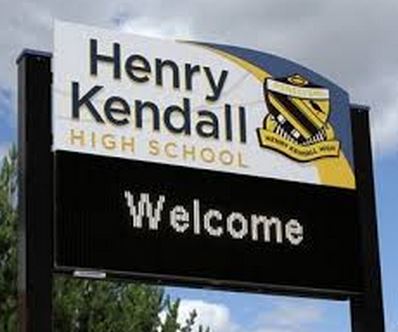 Henry Kendall High School deputy principal, Ms Natalie Wearne said the students displayed “the most tenacious of skills to beat Barker College”. “Our school’s reputation within our community and beyond continues to grow,” Ms Wearne said.

“Barker College last year won the state competition, and are travelling to San Francisco in November to compete.

“We are the only public comprehensive High School from the Central Coast left in the competition and we are set to compete against Cherrybrook Technology High School in three weeks.

“Our triumphant team consisted of; Cooper McKenzie and Ella Whelan as barristers, Carter Jones as solicitor, Laura Johnstone and Marli Geesing as witnesses and our Magistrates Clerk was Molly Mitchell.

“Highlights from our trial with Barker College included Cooper McKenzie’s crossexamination question to the defendant, ‘Can your dog talk?’

“The question brought giggles from the magistrate who allowed it because the defendant had told the Police to ‘Ask Bullet who the driver was’.

“Ella Whelan’s closing address was described by the magistrate as flawless and Barker College was criticised for not understanding the law sufficiently.

“Our witnesses held up comfortably under crossexamination and we look forward to our next trial.”