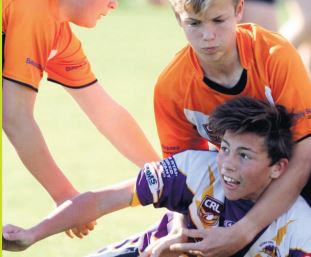 The Gosford Kariong U13(2)s booked their place in this season’s grand final having ground out a 10-4 victory over The Entrance in an absorbing preliminary final played at the Morry Breen Field, Kanwal on Saturday, September 5.

A brace of second half tries to the Storm’s diminutive winger Jordan Eilersen and a conversion kicked by Jayden WildeTaylor provided the Gosford team with its winning advantage after scrambling defence from both sides had dominated a scoreless opening half.

The game hung in the balance with just two minutes remaining, when player of the match Nick Rodrigues chipped into space on the last play the ball. The ball bounced obligingly, straight up off its point and in the ensuing scramble, Jordan Eilersen swooped to claim the game’s pivotal touchdown.

The same two players had combined fifteen minutes earlier to open the morning’s scoring, when Rodrigues sliced through up centre-field before angling right and finding his winger in support.

Eilersen accepted the pass before scampering away to the raucous cheers of the purple clad members of the crowd. The Storm’s captain and hooker, Cameron Bird left the field late in the game with a suspected broken collar bone, however subsequent X-rays at Wyong Hospital revealed no fracture and the dummy half will now be racing the clock to be fit for the Saturday, September 12 grand final.

The hard fought victory over the Tigers has earned Gosford the right to line up against the undefeated Ourimbah in the decider and the Storm boys will have gained much confidence from their strong second half showing against the Magpies in the preceding week’s major semi final.

Meanwhile, the Storm’s other finalists; the U12(3)s and U11(2)s didn’t fare quite as well, with both sides falling in nail biting contests on the adjoining Bill Hicks Field. The U12(3)s went down 14-10 to The Entrance after the scores had been locked at 10 a piece heading into the break. Skipper Jake Martin led the way for Gosford with a series of barnstorming charges, highlighted by a spectacular 40 metre try scored in the south western corner.

And with ‘will o the wisp’ three quarters; Nash DorrattMavin, Michael Porter, Blake Carney and Jeremy Hendriksen all threatening the Tigers line late in the game, a white knuckle ride was experienced by both spectators and coaches alike as the clock wound down on Gosford’s season.

The club’s U11(2)s had fought hard to lead 12-6 early in the second half of their preliminary final before Northern Lakes crossed twice during the latter stages to win the day 18-12. First half injuries to tireless Storm forwards Dylan Gale and Callum Skuse didn’t help Gosford’s cause, however Skuse did return after halftime to muscle his way over for a gutsy try.