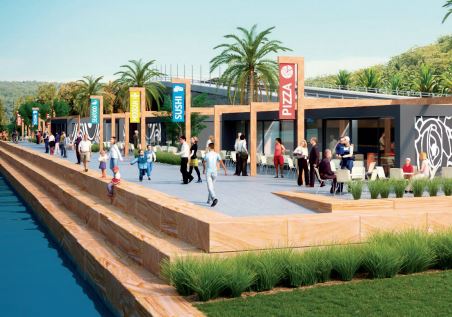 The $3 million Marina Cove concept could be open for business by March 2016, once it received the go-ahead from Gosford Council, according to Commercial HQ director, Mr Tim Gunasinghe.

As someone who grew up on the Central Coast and has spent all his life here, Mr Gunasinghe said getting approval for the Marina Cove had been “two years of pain”.

The concept had to be reconfigured following the April super storm and the redesign went before Gosford Council for approval at its Tuesday, August 11 meeting.

“Doing something with the Gosford waterfront has been talked about for my entire life and nothing ever gets done,” Mr Gunasinghe said.

“Lend Lease pulled out of the finger wharf concept and Council has its master plan, but it would cost hundreds of millions of dollars,” he said.

Meanwhile, his Marina Cove concept consists of 10 pre-fabricated eateries that he said would “draw people to the waterfront”. “They are modular, commercial, factory-built structures, that are built off site and then attached to services on site,” he said.

According to Mr Gunasinghe, all 10 eateries have already been leased and no two will serve the same type of food. The Marina Cove will include Japanese, Singaporean, Italian, Pizzas and Burgers, Caribbean, Indian, Tappas and a café. All 10 eateries will also be licensed.

“We have redesigned the development to raise it 1.25 metres above current ground level to protect it from storm surges and sea level rise. “When we put up the original design to Council, we had a unanimous decision to move forward and support us,” he said.

The land will be leased from the NSW Government for 15 years with renewal opportunities.

“I could have it fi nished for March. “It is about making Gosford a destination, and I am working with Central Coast Tourism, because at the moment, people drive to the Reptile Park and turn around and go back to Sydney.

“Gosford is not a destination at the moment, it is a hole in the middle of a doughnut,” he said.

Why cart waste up the mountain?