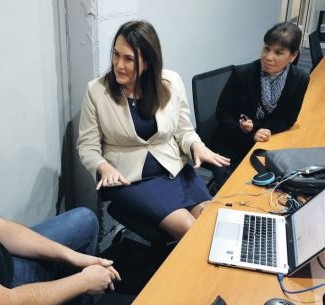 The smart work hub currently operating in Gosford Council’s Kibbleplex building will need to be relocated if the proposed sale and redevelopment of the site goes ahead.

“What a complete waste,” said Cr Hillary Morris, who said Council had received a grant to develop the Smart Work Hub in its current location. “It will need to be relocated and it might be relocated into whatever building eventually goes on the site,” Cr Morris said.

However, Cr Morris said she was not sure what would happen to the Smart Work Hub during any redevelopment of its current location. “I am assuming we will have to redevelop the original Broadwater Hotel site next to Council chambers and that the regional library and smart work hub will go there,” she said.

The Smart Work Hub currently operates from 7:00am to 7:00pm, Monday to Friday, and provides 60 clients with workstations, private office space, meeting rooms and access to the National Broadband Network.

“It was wonderful to walk in and see the hub alive with activity and a number of locals taking advantage of the teleworking opportunities that Kibbleplex provides,” said senator for NSW, Deborah O’Neill, after a recent visit to the hub.

Senator O’Neill was pleased to push the case to Communications Minister Malcolm Turnbull to accelerate the rollout of fi bre to Kibbleplex to ensure that clients could take full advantage of the work hub.

“The NBN was sitting right outside Kibbleplex, but it wasn’t connected to the building and no one could tell me why it wasn’t or when it would happen,” Sen O’Neill said.

“Gosford Council, local residents, and clients of the hub all told me that having the NBN would make it the perfect teleworking spot.

“I wrote to Malcolm Turnbull, and put the pressure back on him. “It shouldn’t take the intervention of a minister and a senator to get a proper response from NBN Co.” Senator O’Neill said.

During the visit, Sen O’Neill spoke with Lisarow local Mr Luke McDougall who is saving many hours a week by commuting to Gosford rather than Sydney.

“Luke is just one example of someone who is spending more time with his family by teleworking in Gosford, and less time stuck in traffi c on the M1 or stuck on the train.

“Each week, dozens of locals take advantage of the 80Mbps download and 30Mbps upload speeds from the NBN making working from Gosford just as convenient as working from the city, just without the commute.

“With Gosford City Council threatening to sell off Kibbleplex, they are putting the Smart Work Hub at risk, and forcing locals back onto the road and away from their families,” Sen O’Neill said.