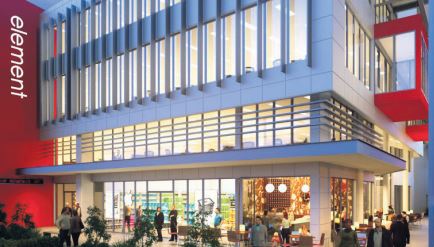 Artist impression of the Element building now under construction in Erina

The $17 million Element building, currently under construction on the Central Coast Highway at Erina, is going to become a landmark, just like its sister the Platinum building, according to the director of the development company CommercialHQ, Mr Tim Gunasinghe.

“We are building a four level retail and commercial building that is a state-ofthe-art centre like nothing that has been seen on the Coast before,” Mr Gunasinghe said.

The first three levels of the new building contain medium and large strata title suites, 90 per cent of which have already been sold, Mr Gunasinghe said.

The market price for those suites ranged from $400,000 to $1.5 million. The top level, which is not yet being marketed, consists of 39 smaller suites that would be suitable for one to three people businesses.

“You can buy one of the smaller suites from $105,000. “The design includes polished concrete floors, meeting areas, break out areas and shared services,” he said.