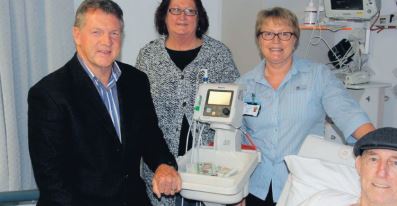 The stroke ward at Gosford Hospital has purchased new equipment after a donation from the Central Coast Australian Hotels Association (AHA) sub branch.

The sub branch collected a total of $20,000 for Central Coast Local Health District from their 2014 Annual Charity Golf Day, double their original pledge of $10,000.

The equipment purchased for Gosford Hospital included four vital signs monitors. Neurology clinical nurse consultant Ms Rhonda O’Neil said that the donated items would be of immense benefit to all stroke patients and their families.

“The portable vital signs monitors enable a patient’s vital signs to be monitored wherever the patient is, not just at the bedside,” she said. “This includes blood pressure, heart rate, temperature and oxygen saturation, which is a measurement of the amount of oxygen in their blood,” Ms O’Neil explained.

“The hospital is the heart of our community, so it is a great cause and it is nice to know it is making a difference for people who need it most,” Mr Narvo said.

Ms Stark said they chose to support the stroke ward because they knew it was an area that was sometimes overlooked in terms of fundraising and donations.

Director of Clinical Operations Mr Tim Free said it was a phenomenal fundraising effort and formally thanked the Central Coast’s AHA sub branch for their ongoing support of the district.

The next Central Coast Hotels’ Charity Golf Day will be held on Monday, August 24, where the sub branch will be raising money for Central Coast Local Health District Mental Health Services.