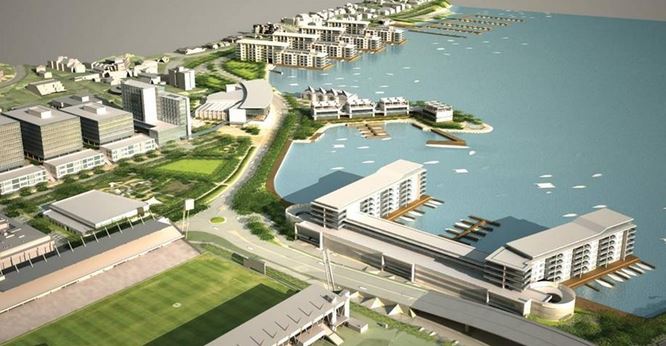 Gosford Council has taken a “high certainty, medium risk” approach to the management of coastal hazards associated with sea level rise and climate change, according to CEO Mr Paul Anderson.

“Council said that we accepted a high certainty in so far as we believed it [climate change] was going to happen, but we took a medium risk approach,” Mr Anderson said.

“I am not sure of the exact numbers, but by the year 2100, a high risk profile would be based on a sea level rise of 900mm and a medium risk brings that back to 740mm,” Mr Anderson said.

“By 2050 a high risk profile would be based on a 40mm rise but medium brings it back to 28mm.” He said other NSW coastal councils have undertaken the same process as Gosford but have adopted for a medium probability and low risk.

“We couldn’t get to a low risk, the science just doesn’t back it up, so we took the middle of the road. “We have separated our sea level rise, flooding and coastal hazards policies so we can amend them as the science and policy says it has changed.”

According to Mr Anderson, the approach taken by Council means that a residential or commercial zone that has been included in hazard mapping will have a mapping constraint “that says you can’t build at this fl oor level on this location.

“The other part that we are trying to work our way through is how do we pick up the development of those lands and set aside other constraints on the property,” he said.

For example, if a particular property is required to have a certain set back to deal with flooding or storm surge, Council is looking for ways to enable that property to have the same development potential by looking at changing the rules for things like required distance from the street if, for example, it backs on to a creek.

“If you’ve got a 1,000 square metre lot that you could build a four-bedroom house on but if you put a sea level rise and fl ood setback on that lot that leaves you with a strip of 3 metres, you are never going to build a house.

“So we are looking for ways that, if we’ve taken the front of the land for sea level rise, we will look at changing the rear setback so the block can still be developed and that takes the pressure off looking somewhere else to rezone environmental land for residential,” he said.

Greens councillor, Hillary Morris said the Development Control Plan in Wamberal had been reliant on a 20 metre revetment wall being built at some time in the future. “We have approved developments based on the idea that wall would save Wamberal residents from storm damage,” Cr Morris said.

“But the wall is really pie in the sky, it is not going to get built,” Cr Morris said. According to Cr Morris, the Council said no to the Dunford development “because we didn’t want someone doing something that big that close to the sea”.

The Land and Environment Court then found in favour of Dunford because Council had based all other planning decisions in the area on its DCP which was based on the revetment wall being built. “So my understanding now is Council’s final coastal hazards planning will probably not have that revetment wall.”

She said she believed “planned retreat” would be necessary in some areas but that did not prohibit waterfront residents from future development.

“Realistically, if they are willing to drill down and build pylons and go to the expense because they want to live there, if people are prepared to do that, then Council will say go ahead,” she said.

“Council is going to have to do some more work on how they are going to save these places and that is why the planning is going to be continual,” she said. “We have taken out the sea level rise from all of our policy documents so they don’t have to get constantly reviewed and rewritten.

“We have policy documents that now refer to our sea level rise policy so I guess that is why Pat Aiken is saying there is no certainty.

“What we are trying to do as Council is, say for example you want to build a garage somewhere we know will be flooded in 20 years, we will say OK but don’t build a hospital there.

“Do it with the knowledge that it will be an issue down the track.”

She said she did not believe that Gosford Council’s approach to sea level rise and flood plain management would end up making home building and contents insurance more expensive for affected rate payers.

“Insurers don’t rely necessarily on what council says, they rely on storm events, data and past policies,” she said. “I don’t think what council is doing is going to be detrimental and if it does cost more, maybe it is because the houses are built where they are likely to flood.

“This issue is really emotional for a lot of people because it is their only capital investment but they should look at doing something to flood proof their house.

“It is a work in progress and I guess what council is ultimately trying to achieve is if you buy or want to redevelop a property that might be affected we’ve got some flags there,” she said.