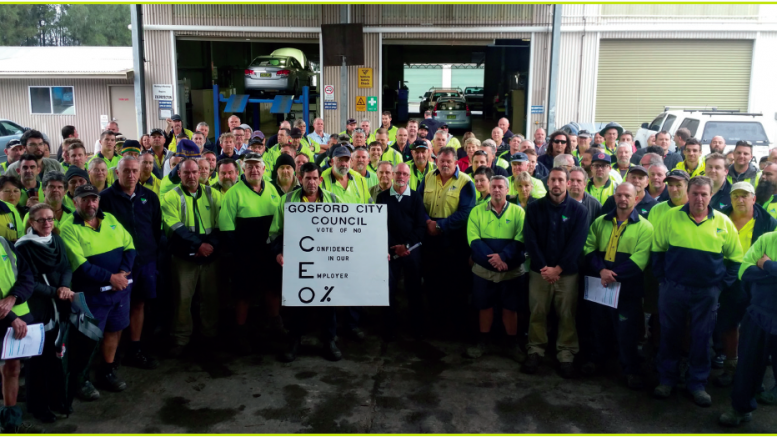 Over 300 Council staff passed vote of no confidence in CEO and management team.

More than 300 Gosford City Council staff from all depots, offices and services passed a motion of no confidence in CEO Mr Paul Anderson and his management team.

The United Services Union (USU) which represents local government workers, said union members held a series of meetings on Wednesday, June 17 and Thursday, June 18 at Gosford Council depots at Erina and Mangrove Mountain, along with the Gosford administration building and Woy Woy depot.

“Hundreds of employees of Gosford Council have taken part in a series of meetings, held in their own time, to discuss serious concerns regarding attempts by council management to reduce take home pay and job security,” USU organiser, Mr Luke Hutchinson said.

“The meetings, which involved a cross section of staff from all areas and services, culminated in overwhelming votes of ‘no confidence’ in Gosford Council CEO, Mr Paul Anderson and his management team.

“Also of concern has been a recent spike of industrial disputes, with management attempting to remove or reduce basic award entitlements.

“Our members sent a strong and proud collective message to the management of Gosford Council, enough is enough,” he said. “The CEO and his management team need to end their aggressive attacks on the pay and job security of the hard-working local staff that deliver services to our community.”

The USU has been disputing a number of policies and decisions by council management in the NSW Industrial Relations Commission, including a proposal to cut workers’ pay by up to four per cent each year. “These outrageous cuts will ultimately lead to lower productivity and service output,” Mr Hutchinson said.

“Our union stands with the Central Coast community, which can’t afford to see productivity and service delivery drop because of ideological attacks by the council management team. “We’re urging concerned community members to contact their local councillor and voice their opposition at these cynical attacks on local workers.”