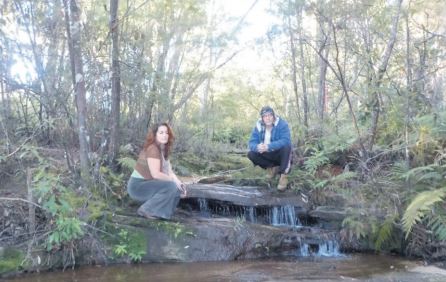 Eighteen months after Camp Quoll, the Calga Cultural Heritage Base Camp, was established to fight the proposed Rocla sand quarry extension, the future of Calga is still unclear.

“We’ve done literally everything we can to demonstrate why this quarry shouldn’t go ahead,” said Mr Ian Sutton, group spokesperson for the camp. “The Calga region is rich in Indigenous ancient history, with many identifi ed sacred sites, rock paintings, carvings, and rock structures and with what experts predict is an undiscovered network of scattered artefacts,” Mr Sutton said. “The site that Rocla Quarry occupies is right in the middle of a whole landscape that was, and is, of immense cultural signifi cance to the Indigenous community, and to Australia’s history. “The area that comprises Calga, Peats Ridge and Mangrove Mountain is the major source of the Central Coast’s water supply,” he said. “The mining activity of the Rocla Corporation is already removing complete chunks of our precious mountain-top aquifers that are irreplaceable, let alone the further damage that would occur to our remaining aquifers and to the groundwater-dependent ecosystems, should the expansion go ahead. “The impact to the local environment, the bushland, the wildlife, and many threatened plant and animal species, would be irreversible. “If an expansion of the Rocla Quarry was approved, the quarry border would expand out to within metres of The Walkabout Wildlife Park, and their conservation and cultural heritage programs would be placed at risk by noise, dust, air pollution issues, and the uncertainty of impacts on the park and its local water sources and surrounding ecosystems,” he said. According to Mr Sutton, affected stakeholders and concerned Central Coast residents, are awaiting an announcement from the Land and Environment Court of NSW, expected to be delivered in mid-July. “The court decision that everyone is waiting for will state whether the Rocla Sand Quarry at Calga has government approval to go ahead with a massive expansion of their current mining operations,” Mr Sutton said. “While we wait to hear if the Land and Environment Court gives approval, for corporate profi t to be put ahead of the protection of one of the most archaeologically signifi cant Indigenous sacred sites in Australia, let me tell you, the community has demonstrated, with the loudest possible voice, that they do not give approval,” he said. One local resident, Ms Kelia Keogh said: “While there is great distress within the community at the possibility of this quarry expansion going ahead, it has been heartening to experience seeing the Indigenous and nonIndigenous community, including local businesses, farmers, and residents, all coming together in solidarity, to stand up and protect the Central Coast water supply, local Indigenous heritage, and the local environment which includes endangered fl ora and fauna species.” Mr Sutton said, for at least 10 years now, the Calga, Peats Ridge and Mangrove Mountain communities have been fi ghting to protect the hinterland from the expansion of the Rocla Quarry. For the last 18 months, the Mountain communities have been supported by the wider Central Coast community, in writing letters, emails, making calls, public talks, court appearances, awareness and fundraising events, and gathering together in solidarity, to send a strong message to the governing department and ministers that “our Central Coast is worth protecting”, according to Mr Sutton. “While it has been frustrating dealing with drawn-out bureaucratic processes, and government departments that are inherently fl awed, I hold strong belief that if the mine expansion gets approved, the Central Coast community will join together like never before to demonstrate that the only acceptable development policies or court decisions are those that protect our Central Coast Hinterland, its pristine waters and culturally rich ancient heritage,” he said.