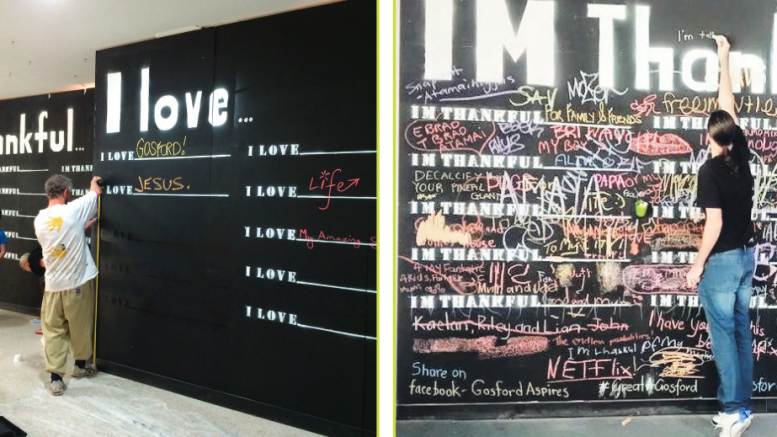 Part of the nearly completed renovated Imperial Shopping Centre in Gosford has been transformed into a public art space where the community can write messages of hope, gratitude and love on a large blackboard.

The curator of this project, local artist, Mr Glenn Hambleton was inspired by a video he saw on TED.com called ‘Before I die’. “This video was a story of a young woman, Ms Candy Chang who lived in New Orleans and lost a very close friend with cancer,” Mr Hambleton said. “Before her friend past away, she was told to do as much as she could with her life before she died,” he said. “She then painted a boarded up old building with the message ‘before I die..’ and within one week it was full of messages. “This concept has now gone global with over 1,000 walls in many countries around the world.” Mr Hambleton approached Gosford Council and shared the concept. “They came back very enthusiastic about doing something similar in the Gosford CBD. “The Imperial Shopping Centre management then approached me as they were very keen to spruce up the renovations of the shopping centre and felt this would be a great way of bringing some life to the centre. “With the help of some volunteers, the chosen boards were painted with black-board paint and sign written with the messages ‘I’m Thankful…I Love …’.” Within two days, the boards were full of messages from the community. “The response has been so overwhelming with so many positive messages written in just two days that the walls had to be cleaned so more messages could be put up. “The plan is to create more boards around the Gosford CBD including in open spaces like Kibble Park. “There is no reason it can’t be done all over the Central Coast, it just needs like-minded people to get on the initiative,” he said.