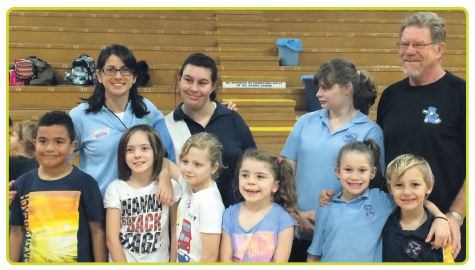 Around 20 deaf and hard of hearing children from the Central Coast tried their hand at baseball, hockey and soccer at the Niagara Park Stadium on Thursday, May 7 as part of the Active Deaf Kids (ADK) program.

The Active Deaf Kids program, an initiative of Deaf Sports Australia, is designed to encourage deaf and hard of hearing school children to be active.

The Niagara Park clinic was overseen by Australian deaf basketball player Irena Farinacci, who has represented Australia at the Deaflympics and World Deaf Basketball Championships.

The kids received expert soccer training from Renee Rollason from NSW Soccer who was a midfielder for Sydney FC in the Australian W League.

“It’s a great opportunity to introduce them to sports they have perhaps not previously played, and to make friends with other local children who are deaf or hard of hearing.”

“Opportunities for deaf children to participate in sport are significantly less than that of hearing children.

“As a consequence, the incidence of childhood obesity in the deaf community is higher than the national average,” she said.