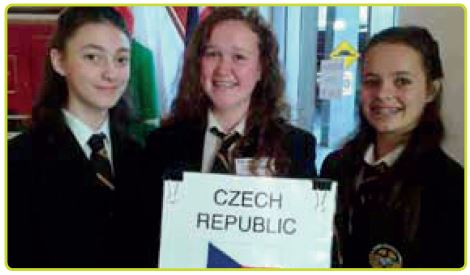 On Thursday, May 21 a group of year nine students from St Philips Christian College, Narara, Abigail Crocombe, Mikayla Saitta and Bianca Carnovale, represented their school for the first time at the Model United Nations Assembly (MUNA).

MUNA gives students an opportunity to present views on issues which are being debated in the United Nations (UN).

Each school represents a UN member nation and on this occasion the St Philips students were representing the Czech Republic.

The College team felt very strongly about the ‘no’ vote regarding changes the USA wanted to make to climate change.

A debate relating to ISIS was compulsory.

The highlight of the day came when the speaker and adjudicators gave St Philip’s Christian College in their role as Czech Republic, a commendation for “a gallant effort by Czech Republic given their first time at MUNA”.

The team was deemed to have a good balance and extensive general knowledge about their country by the speaker and adjudicators.