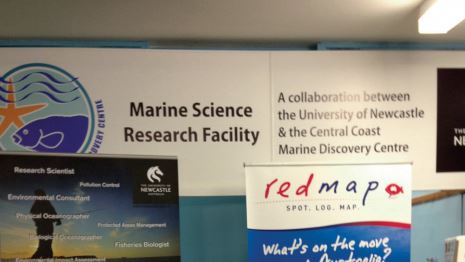 “The University of Newcastle had been a long-time supporter of the Marine Discovery Centre proposal (since 2004) and in 2011 this partnership was formalised,” said the Centre’s chairman, Mr John Asquith. “The 2014 Annual Report from the CCMDC to the University of Newcastle shows how the partnership benefi ts the community, students and schools,” Mr Asquith said. “The Centre works closely with the University to create opportunities for the community, students and schools. “This work is aiming to build aspirations and create an interest and understanding while enjoying our marine environments. “The Centre is mostly manned with volunteers which includes University and TAFE students who gain valuable experience in dealing with the public and other students, putting their marine science knowledge into practice and communicating science to the general community. “Casual teachers are employed to assist with school students. “The total number of visitors to the Centre in 2014 was 5,400 people. “This included 1,100 students from schools and preschools, and is a great result. “We are all very proud of this achievement. “The Centre creates a fabulous learning environment which benefi ts the students and the scientists. “The partnership with the Central Coast Campus results in many joint projects, including monitoring, public talks, training and experience for students, giving them skills they can take into the workforce.“ Students are also involved in school visits, teacher information sessions, events and talks involving academics. In 2014, school programs included 14 School visits (including preschools) with nine different excursion and incursion programs. “In addition, the CCMDC has a research room that provides space for honours students. “In recent years, research projects have included investigating Port Jackson Sharks and the responses of squid to various stimuli. “Future research will include investigating the role of oysters in maintaining water quality. “It is important that the facility is accessible by everyone on the Central Coast, in particular the disadvantaged. “In the next five years, the Centre is hoping to build additional exhibition space, laboratories and classrooms,” Mr Asquith said