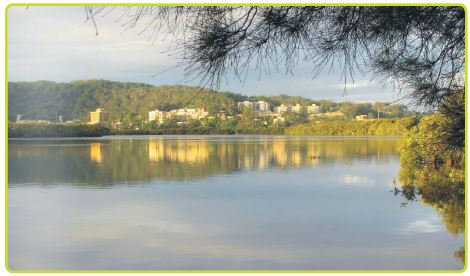 Gosford mayor, Cr Lawrie McKinna and Gosford Council chief executive officer, Mr Paul Anderson, have both reconfirmed their commitment to the Coastal Open Spaces Scheme even though Council has voted to change the way the scheme will be funded.

The Council Open Spaces Scheme (COSS) is unique to the Central Coast and ensures that, wherever you are in the Gosford local government area, if you look up, you will see a corridor of green land around the ridge line.

According to Mr Anderson, the history behind the funding of COSS goes back over 15 years to when Gosford Council applied for a specific levy to purchase land for COSS through a rate rise.

“The majority of that money was used to fund loans to build infrastructure or to acquire land,” Mr Anderson said.

“Those special levies have finished and all loans had been repaid,” he said.

The COSS levy was applied at 0.00003c per rateable dollar and shown on Gosford rate payers’ bills as a specific line item.

“What council resolved to do because the money was no longer being used for loan repayments, was instead of that appearing as a separate line item in the rates notice, all levies have been rolled into one number and applied as the rate owing,” Mr Anderson said.

However, he said the actual amount of money allocated to COSS has not changed as a result.

“What it enables us to do is adjust where that funding is sent to on an annual, four years, five years plan, to where it needs to be spent.

Cr Hillary Morris attempted to move a motion to retain a special levy of 0.00003 cents per rateable dollar to be quarantined for spending on acquiring and maintaining COSS land only, but the motion was defeated.

“Ultimately Council’s goal and the tag line that we have is ‘building communities, building futures’ and that is all about what we have to do to secure the growth of our community and the health of our community,” Mr Anderson said in defence of the decision to stop the COSS special levy.

“COSS is important and unique and we are very lucky to have it and it is part of what we all love to live in.

“We are not walking away from COSS, we are just saying the loan has been repaid and we just need to be looking at the strategy of how we are going to acquire the remainder of the land under the scheme and maintain the land.

According to Mr Anderson, the money to fund COSS is covered by Section 94 of the Local Government Act and “can’t be used for anything else, it is illegal to do so”.

“It has cost us just over $4m to buy the first 65 per cent of the COSS land, so surely the same amount of money will cover the acquisition of the remaining 35 per cent.

“It is a touchy subject, but something the community needs to have a conversation about.

“Maybe we should look at enabling people to buy biodiversity offsets in our COSS lands.

“The sad part about our COSS system is that although we have a fantastic ring of green around the city, not all of it is accessible.

“There is no better way to get the community to appreciate something than to enable them to use it,” he said.

“The funding mechanism and operating expenditure is the same process we have used to fund the purchase and maintenance of COSS land as we have always done,” he said.

Gosford mayor, Cr Lawrie McKinna said he believed questions asked by several councillors relating to COSS and the answers they received from Council staff proved that COSS is still a high priority.

Ms Jane Smith from the Community Environment Network (CEN) spoke in favour of retaining a specific levy for COSS and said CEN had received over 50 submissions calling on Council to set aside the same amount of money for COSS.