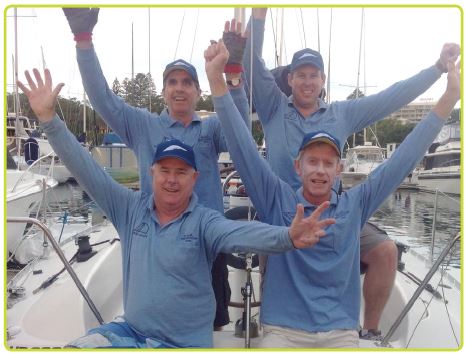 Some of the sailors aboard Eggsilante

Some of the sailors aboard Eggsilante

The three race Commodore Cup series was held fi rst with a competitive fl eet of 41 yachts in two divisions.

Weather conditions varied over the three races from near perfect for the iconic Three Islands race to very light winds for race two, however, all the Gosford yachts acquitted themselves well in this series.

Kelsea Blue produced some good results, fi nishing second and third on handicap in individual races and a third in the overall Commodore Cup series.

The second race series, the Port Stephens trophy, had GSC yachts in both Performance Racing and Cruising divisions.

Roy and Liz Leslie with Koko competed in the performance racing division against some highly competitive racing yachts and produced good results with a second and a fourth on handicap in the fi ve race series to fi nish with a creditable sixth overall.

Kelsea Blue (Adrian Williams) fi nished second over the line and on handicap in the last race and a creditable sixth in the series.