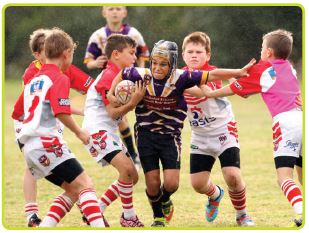 The soggy start to this season’s Central Coast junior rugby league competition couldn’t dampen the spirits of the Gosford Kariong Storm’s Under 14(1)s during round three action at Narara on Saturday, May 9.

The Storm took to their grand final rematch against the Wyong Roos with tremendous vigour, running out comfortable 28 to 6 winners to record their first win of the new season.

Following a scoreless opening quarter hour, the game suddenly tilted the Storm’s way when powerful forwards, Suli Hakalo and Jake Grimley, took turns in charging through the meat of the Wyong defence to career away for long-distance tries.

The Gosford Kariong U10(1)s maintained their winning start to the season with an impressive 18-12 victory over Northern Lakes.

Tries to Jackson Pennell and Zac Campbell had the home team leading Northern Lakes by an even dozen at the break.

The teams then traded tries early in the second half.

Seven days later, Robbie Campbell’s team made it three wins from as many starts when they overran Woy Woy 38-14 in rousing style.

The most exciting contest of the third round was provided by the U11(2)s as Gosford and Wyong wowed an appreciative Carrington St crowd.

They turned on an early morning thriller that had the result remaining in doubt until the final moments.

The lead changed no fewer than eight times during the game before a late Wyong try snatched the Roos a 28 to 26 victory.

The following week, lady luck made amends as the boys managed to squeak home 22 to 20 in an equally even handed contest against Erina.

In other Gosford Kariong round three and four results; the U12(3)s remained undefeated following a 28 to 20 victory at Terrigal.

A spirited showing from the U15(1)s resulted in an agonizingly close 14-12 loss to Northern Lakes.

Gosford trailed eight points to nil at the break and stormed back into contention via second half tries to Toutai Aho and Noah Brown.

The Gosford team was again hot on the attack when the final bell rang out.

The U14(1)s followed their morale-boosting win over Wyong with a heavy loss.

Gosford ran into a whitehot Erina side in round four; a game in which the scoreboard read 20 to 0 in favour of the Eagles before the Storm had even been afforded the opportunity to touch the ball.

The U13(2)s were well below their best against Ourimbah.

The Magpies prevailed 32 to 10 in the local derby.

A try to The Entrance with less than a minute remaining on the clock denied the Gosford boys during the follow-up round.

The Tigers snatched a dramatic 14 to 10 win in drizzly conditions.

The U10(2)s battled hard before falling 54 to 4 to an impressive Umina Bunnies side in the opening game of round three, before going down 34 to 12 to the Warriors a week later.