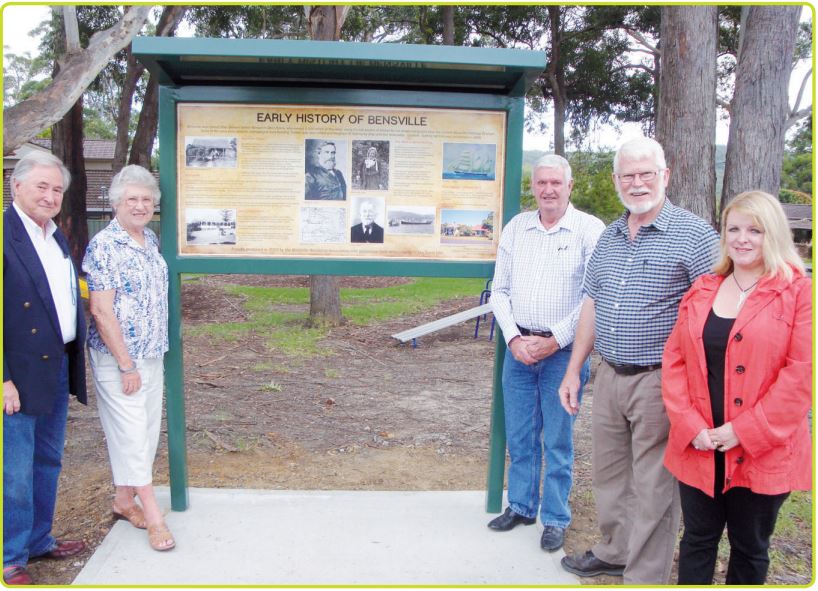 The construction of a historical sign in Bensville is generating keen interest amongst residents and visitors.

The sign traces the early history of Bensville, especially links to Ben Davis who purchased the area’s timber rich 1,000 acres in 1871. His thriving shipbuilding business formed the backbone to this emerging locality. Some of Ben Davis’s descendants, including great grandson, Brian Davis were present at the unveiling of the new sign on Monday, March 16. The sign has been erected by the Bensville Residents’ Association to recognise the rich history of the Bensville area. A s s o c i a t i o n representative, Peter Speers, explained that the historical sign has been located in a prominent position in the Bensville Reserve, almost opposite the Bensville shopping village. “Many people are interested in the history of the area, especially of Ben Davis after whom the area was named.” “A prolific shipbuilder, between 1848 and 1883, he built a total of 49 vessels, 36 at his Davistown yard and 13 at his Bensville yard,” Mr Spears said. “He built the first house near the Cockle Creek foreshore with commanding views across to Davistown. “There he and his wife Eliza raised 11 children who later helped develop the Bensville area,” Mr Spears said.

McKinna calls on local state members and candidates to deliver