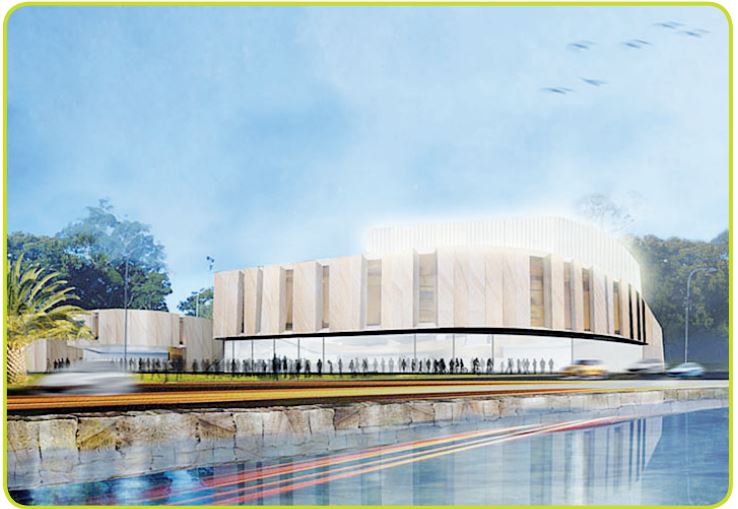 An artist’s impression of the Performing Arts Centre

A re-elected Baird Government will invest $12 million in the construction of a performing arts centre and conservatorium in Gosford.

An artist’s impression of the Performing Arts Centre

Minister for the Central Coast Mr Rob Stokes and Member for Gosford Mr Chris Holstein made the announcement on Wednesday, March 4, and said the centre would be located on the corners of Central Coast Highway, Dane Dr and Vaughan Ave, adjacent to the Gosford Memorial Park. “In my fi rst speech to Parliament when I was elected in 2011, I committed to fi ghting for this project,” Mr Holstein said. “I am immensely proud to be announcing today that it will now become a reality under a Baird Government. “A regional performing arts centre will provide new opportunities for young people on the Coast to develop their musical talents, stimulate cultural tourism, and play a pivotal role in the revitalisation of Gosford,” he said. The model endorsed by Gosford Council includes a multipurpose auditorium seating up to 1,000, a studio with retractable seating accommodating 200 people and a foyer space suitable for exhibitions. The conservatorium will allow for individual teaching spaces, ensemble rehearsal rooms, a 150-seat performance and teaching space, storage and library facilities. Mr Stokes said a budget of $30 million for the Regional Performing Arts Centre and $6 million for the Conservatorium has been set based on previous work by Gosford Council and the Central Coast Regional Development Corporation. “We hope to see construction start on the project next year, following the provision of matching contributions from the Federal Government and Gosford City Council, and the approval of a development application,” Mr Stokes said. “The development application process may generate new ideas for the project and assist in refi ning the fi nal design. “We look forward to working with the community to deliver its vision for this important cultural facility,” Mr Stokes said. Member for Robertson Ms Lucy Wicks has also welcomed the announcement. “As a musician who learnt violin from outstanding teachers at the Central Coast Conservatorium, I’d love to see a performing arts centre built on the Coast,” she said. “In fact, the Coalition announced before the election that we will give consideration to Stage 2 funding for the Gosford Performing Arts Centre, providing matched commitments from State and local council are made. “The Government is focused on developing regions like the Central Coast, with programmes such as the new National Stronger Regions Fund – an initiative to boost productivity and economic development in Australia’s regions by funding priority infrastructure projects in local communities. “This fund will see the Commonwealth match dollar for dollar applications from Local Government and notfor-profi t organisations up to $10 million,” Ms Wicks said. Gosford Council mayor Cr Lawrie McKinna is also celebrating the funding announcement. “My fellow councillors and I are really excited by today’s announcement – what a great win for Gosford and our wider community,” said mayor Cr McKinna. “We are all really passionate about investment into the Gosford CBD and waterfront and this commitment is a massive step forward,” he added. Gosford Council’s CEO Mr Paul Anderson said: “I’m really looking forward to the Gosford CBD and wider Central Coast region benefi ting from this funding – it’s the kick-start our city needs.” “A strong, vibrant and prosperous CBD can only have a positive impact on the wider community and we anticipate signifi cant economic, tourism and employment benefi ts as a result of this landmark project,” said Mr Anderson. Mr Anderson added that the Conservatorium element of this project was now on the table for discussion. “While the Conservatorium was adopted by Council, it was not listed as a priority – this announcement gives us an opportunity to look at our options. “We’ll be discussing the issue further and will be in consultation with a number of key stakeholders regarding this element of the project moving forward,” said Mr Anderson. Mayor Cr McKinna said that it was great to see the Central Coast getting the recognition it deserves. “We will be continuing to work hard to ensure our region gets its fair share of infrastructure funding for vital projects such as the Regional Performing Arts Centre. “We hope this is the start of big things for Gosford and would like to thank Minister Stokes and the Liberal candidates for their support through this commitment,” said mayor Cr McKinna. Gosford City Chamber of Commerce president Ms Ali Vidler said the Chamber was “delighted” with the announcement. “The Chamber was really excited when the winning concept design for the performing arts centre and conservatorium was announced and was subsequently endorsed by Gosford City Council,” Ms Vidler said. “There is no doubt that completion of this project will stimulate commercial activity, increase attendance at cultural events, boost cultural tourism and just as importantly, provide new opportunities for young local people to develop their musical talents. “This announcement is a giant step in the revitalisation of the Gosford CBD and Gosford Waterfront,” Ms Vidler said.