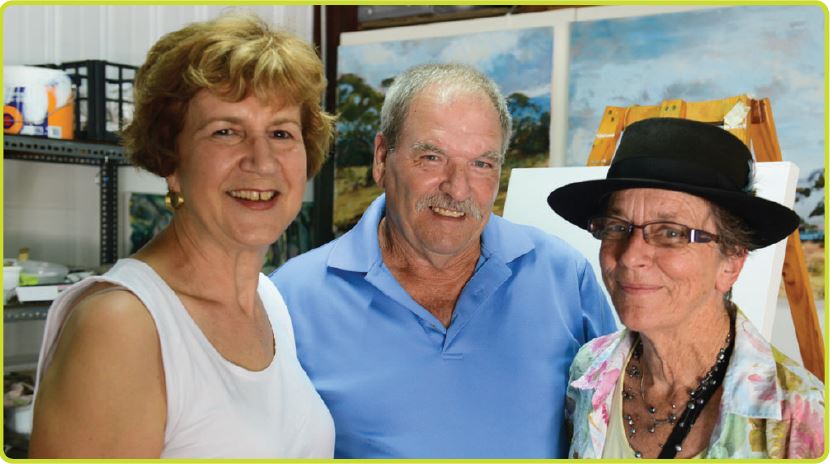 Art Studios Cooperative will be offering a number of new exhibitions and opportunities in the coming weeks.

The first of the exhibitions will be ‘Relocation’, a new work by Carolyn Griffi ths, which will run from Wednesday, March 18, to Sunday, March 29. The exhibition reception will be held on Friday, March 20, and will feature guest speaker Gosford mayor Cr Lawrie McKinna. Then, running from Wednesday, April 1, to Sunday, April 12, will be the exhibition ‘Moments’, a collection of artworks by members of the Art Studios Cooperative. The Rolling Film Project 2015 will then feature from Wednesday, April 15, to Sunday, April 26. The reception for this exhibition will be held on Friday, April 17. Following on will be the community commemorative ANZAC project, ‘Australian Spirit’, which will run from Wednesday, April 29, to Sunday, May 24. The exhibition’s opening reception will be held on Saturday, May 2. ‘Australian Spirit’ will not only commemorate the 100 year anniversary of Gallipoli and the ANZACs, but will also honour the services of all Australian servicemen and women over the past 100 years. ‘Australian Spirit’ project manager Ms Leasha Craig said that the project was shaping up to be a quite signifi cant community project. The project involves 11 small collaborative groups, each consisting of a local returned servicemen, a poet and a visual artist, with each collaboration creating a visual interpretation, either 2D or 3D, and poem inspired by the returned serviceman’s stories and recollection of their experiences. The concept of the exhibition was conceived by Ms Craig after hearing a poem recited at an ANZAC service in 2014, ‘The ANZAC on the Wall’ by Jim Brown. “The poem evoked such a visceral response, full of emotion and imagery, and really brought their experience alive in a way a history class and textbooks never did,” said Ms Craig. “I thought the combination of poetry and visual art could let others feel this empathy with the experiences of our servicemen and women, and the ANZAC centenary was the perfect time to band together with other local groups and produce this project for the wider community.” Both the written and visual artworks created through the collaboration will be exhibited in the foyers of three Central Coast RSL clubs at Gosford, Davistown and Wyong on ANZAC Day. The Australian Spirit Exhibition will then be on display at Art Studios Gallery, along with a short documentary fi lm including interviews of participants, for the month long period. The exhibition will be accompanied with a professionally printed 28-page magazine covering all works created during the project, and supporting information and images of the returned servicemen and women who inspired these works. The magazine will cost $5, with all proceeds going to the Returned and Services League NSW. “This project has proven to be a challenge for both artists and poets, so as a result, we are seeing some amazing written and visual artwork,” said Ms Craig. “We believe the exhibition will be a substantial community event, with the broader vision of expanding the project over the four years of the centenary.” In future years, ‘Australian Spirit’ aims to include more teams of artists, poets, photographers and returned servicemen and women, more RSLs in the Central Coast region and beyond, and will raise funds to donate to more organisations, assisting returned servicemen and women. The project also aims to culminate into a travelling exhibition, featuring all works created over the entire project, and a hardcover commemorative art book, in 2018.

McKinna calls on local state members and candidates to deliver