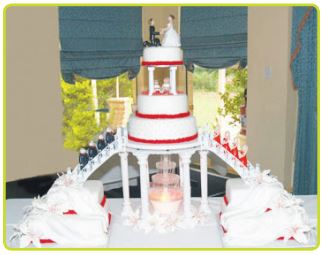 A cake by Renaissance Cakes

Four businesses in the Gosford area have placed at the Australian Bridal Industry Awards (ABIA) held at Dockside in Darling Harbour on Tuesday, December 2.

Lisarow based Renaissance Cakes took top honours in the Cake Design category with a rating of 99.66%.

DJ Magoo’s Party and Equipment Hire, based in Wamberal, placed second in the Disc Jockey category with a score of 99.83%.

Kel-Leigh Couture was also a nominee last year in the categories of Bridal Gown Boutique and Bridesmaid Gown and a finalist in the Designer/ Couture Gown category and a nominee in 2009.

Erina based Kerry Wall CMC was a finalist in the Celebrant category with a score of 99.22%.

A number of other Central Coast based business also placed including first placed Creative Escapade in the Stationery category, first placed Sue Taylor Photography in the Photography category, Overload Entertainment which placed third in the Master of Ceremonies category and fourth in the Disc Jockey category and third placed Project Cake in the category of Cake Design.