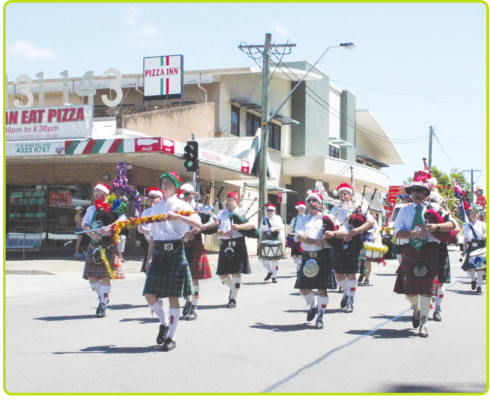 The newly reformed City of Gosford Pipe Band were cheered by onlookers as they marched for the first time down Mann St, Gosford, on Saturday, November 29, as part of the Gosford City Christmas Parade.

The City of Gosford Pipe Band has been hard at work practicing for the last two months since the official announcement of its reformation. Many members of the local  community  were thrilled when they found out that the band would march again as it had been many years since the band had marched down Mann St. Newly appointed City of  Gosford  Pipe  Band president  Mr  Douglas McFarland  said  he was  overwhelmed  with excitement to play his bagpipes down the main street of Gosford, as he once did as a boy. “It had been 17 long years since the band had last played a community event in Gosford,” he said. “As we played down the street, the sounds of the pipes and drums translated to the joy on people’s faces, we were embraced by a people longing for the return of the bagpipe. “It was clear that as ‘Scotland  the  Brave’ played, it was the crowd favourite “Marching down Mann St for the fi rst time in 17 years was a great symbol of the return of the City of Gosford Pipe Band,” said Mr McFarland. Gosford’s  Scottish mayor Cr Lawrie McKinna was there as the band warmed up. The mayor said the band sounded great and would bring a tear to a glass eye. “Brilliant Dougie, you and the band should be proud of what you and the members have done in two months, something Gosford can be proud of,” he said.