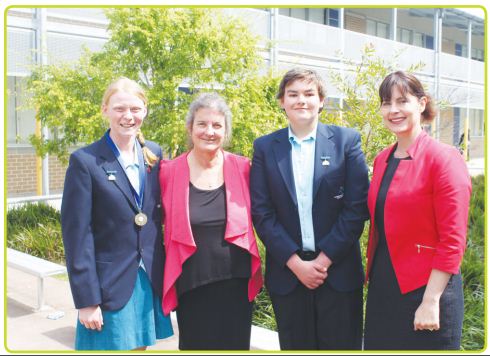 Member for Robertson Ms Lucy Wicks has spoken in Parliament about the significant milestone for Year 12 students currently taking place across the Central Coast, as they start marking their final moments in high school.

This includes the first ever graduation of Year 12 students from Kariong Mountains High School. This school opened in 2010 after years of campaigning from the community. Narara Valley High School and St Joseph’s Catholic College at East Gosford have also recently held ceremonies. “Over the past several weeks graduation ceremonies have been taking place across the Central Coast, and it has been an honour to be present at many of them,” said Ms Wicks. “For students and for their proud parents, these are the important times of excitement but also reflection and consolidation before the important Higher School Certificate exams. “Seeing the joy in these young people’s faces as memories came flooding back and friendships were savoured made each presentation event that I attended that much more special. “One of the most significant ceremonies this year has been the first ever graduation of year 12 students from Kariong Mountains High School. “The foundation cohort, who began in year eight, helped in designing the school’s motto, uniform, logo and, importantly, its reputation. “The 48 students who graduated last week as the first year 12 class are now well placed to pursue pathways in higher education or traineeships. “Handing medallions to each of these students was a great honour, and it took me back to my own final days as a student at Gosford Christian School in Narara. “Back then, that school was also new on the Central Coast, and it was a tremendous honour to be a part of the first graduating class of Gosford Christian School in 1990. “Principal Ann Vine, deputy principal Scott White, founding deputy principal Gus Vrolyk and year adviser Peta Werlemann from the Kariong Mountains High School have done an outstanding job in joining with the community to build the school up to what it is today right there in the Mount Penang area. “The school is known for its specialisation in biosciences and technology, but what was obvious was how hard the school works towards its values of unity, knowledge and respect. “At St Joseph’s Catholic College at East Gosford there was also genuine pride in their academic achievements and the school’s culture. “The students spoke fondly about growing from being ‘Joeys Girls’ into ‘Mackillop Women’ in the spirit of Mary MacKillop, and it was also a great honour to be there. “The night was superbly run by principal Tony McCudden and year leader Dave Matthews, and it was hosted by Holy Spirit Church at Kincumber. “I must congratulate all the students, including Riley Evans, who won Sportswoman of the Year and who has been called into the state and national basketball teams; Dana Hawton, whose service to the community includes being a member of the Rural Fire Service despite her youth; and Jade Antcliffe who received the University of Newcastle Award for Academic Excellence, which includes a $2,000 Vice- Chancellor’s Scholarship. “I would also like to commend Narara Valley High School, whose Year 12 Graduation has also taken place recently. “I commend the principal Michael Smith, year adviser Britt Fowell and the impressive school captains, Shae Wright and Lachlan Head. “Shae also received the Australian Defence Force Long Tan Leadership Award, and Lachlan was presented with the Senior Service award. “Eddison King was Narara Valley’s recipient of an excellence award from the University of Newcastle. “There were many other outstanding students on display at all three of these schools, and the fantastic news is that this government is providing all students with more choice and more opportunities,” said Ms Wicks.